Stories of a Rebel Child

I have been babysitting two little boys this week, both 3, and good gracious. These two do not know how to share or get along. I have broken up fights over apple slices. One little boy even slapped the other because he was looking at his face. Its been an adventure. Kudos to you parents out there. But I have been able to use my educational class info to come up with educational activities for them to do. So yay for college.

I was supposed to have a doctor's appointment Tuesday but they canceled on me. Apparently my doctor has the flu. So I decided to go all rebellious and get my nose pierced instead. I must admit I was nervous. My best friend had hers done recently and was trying to tell me it did not hurt hardly at all. The whole way there I was sweating and nervous. Seems like I wouldn't be seeing as how I get needles all the time. The road I had to use was shut down, and I did not know another way. It was like Life was telling me no. But I'm a rebel. I followed other cars, hoping they would lead me to the road I needed. Thank goodness they did. I finally made it to the piercing place. The guys in there were really friendly and joking. It had a very relaxed feeling. I was ready for this. I sat down on the chair. The guy had me take deep breaths and then stuck the needle through. It felt like a lot of pressure and hurt some. The creepy thing is when they have the piercing needle sticking all the way through your nose. Its pretty gruesome to open your eyes and see that. The guy puts the stud in...and the jewel falls off! So he tries to put a different stud through but it just wouldn't go. I was a little upset to say the least. So I had to get pierced again through the same hole. This time the stud stays intact. So I got my nose pierced twice in one day. The second time hurt a lot, I will not lie. My nose is still sore two days out, but I love it. 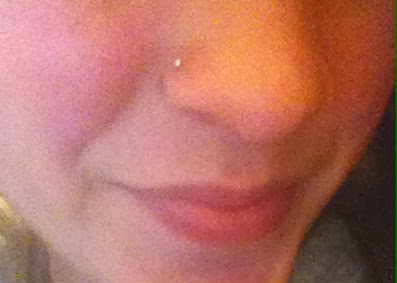