Looking back on my last post I realize it has been forever and a day since I have blogged. So much has happened in my life that blogging just kind of took a backseat. I switched schools again...I know, I know... so indecisive. I'm finally at a college for good. I'll be starting my junior year soon...so excited! My boyfriend and I broke up for a couple months but recently reconnected and started dating again. I spent time with old and new friends. I've had the time of my life. I've experienced so much and learned so many lessons. I even went to Dayglow or Life in Color as its now called. So fun!!! 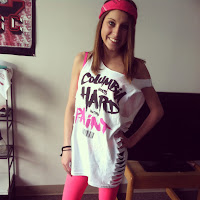 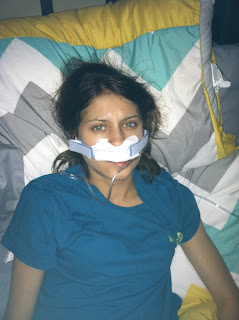 My semester ended and then I went to have sinus surgery performed. My doctor recommended I go to an ENT who then decided sinus surgery would be the best thing. They were both under the assumption that bacteria in my sinuses were reinfecting my lungs causing exacerbations. They thought maybe it would help my CF. It seemed like a simple procedure. The ENT even said that I would most likely keep getting the procedure because I wanted it! He said it would make me feel so much better. The place I had my surgery at was two hours away from my home. I arrived and got prepped for surgery. I went back and they started putting something through my IV, not sure what but it made me very calm. I  heard the doctors talking but couldn't really understand. A surgery that wasn't suppose to take very long ended up taking several hours. In recovery my mom was told they wanted to transport me to a hospital. My doctor from home called my mom and let her know my oxygen was low before surgery and dropped pretty low during surgery. None of the people at the surgery place bothered to tell us before or during the surgery. Needless to say I went home that day, not the hospital, but was on oxygen for weeks after the surgery.  My functions plummeted from the 50s to the low 30s. I was in bad shape. I had to go in for a PICC line a couple days after. 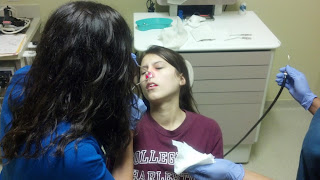 The sinus headaches never went away and I never felt better. My functions are back up but I would not consider getting the surgery again. I recently had to go back to the ENT where they removed scabs from inside my sinuses. If you look close you can see the red light shining through my mouth, nose, and eyes.

I  wonder if anyone else had an experience like mine. I am going to get back on my blogging game. I just feel like my life isn't exciting enough to blog all the time but I'll try.